Pay A Visit to Sikkim

Nestled in the lap of the Himalayas, amid spectacular terrain, pristine lakes, luxuriant forests, roaring rivers and gentle streams, Sikkim is an absolute paradise and a destination for all seasons. 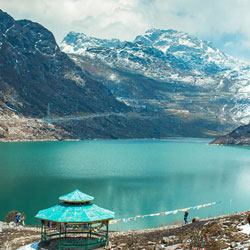 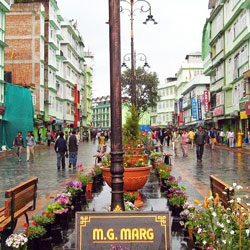 The landlocked state of India nestles in the Himalayas with the entire state being hilly with the elevation ranging from 280 meters / 920 feet to 8585 meters / 28000 feet. The small and vibrant state is known for its orchids, Butterflies, monastery, high altitude lakes, etc. It's diversification of wildlife is worth mentioning. It is said that there are nearly fourteen hundred butterfly species found in the Indian subcontinent approximately six hundred and fifty can be found in Sikkim. Catching a butterfly and picking orchids can lead to judicial proceedings. Smoking in public is an offense.

Mount Kanchendzonga the third highest peak is located in the north western part of the state and can be viewed from all the popular tourist spot. One can come across twenty-eight peaks, twenty-one odd glaciers, nearly hundred high altitude lakes which nature has provided to this state and thus making it as a tourist paradise. Five hot springs, twenty-five varieties of rhododendron are some of its major attractions of the state.

In Sikkim, one can enjoy the well preserved and unique nature, culture and history of this state. The People of the state consist of three ethnic groups namely Lepcha, Bhutia, and Nepali. They are friendly and spiritual and have managed to preserve their own identity.

Geographically the state has the steepest rise in altitude over the shortest distance. Another diversified feature is that within its 7,096 square kilometers the entire climatic range from tropical to temperate to alpine. There are three passes in the Himalayan range. Nathu - La, Jelep - La, Cho - La was at one time important corridors of passage between Sikkim and Tibet and was part of the historical silk route.

Sikkim the 22nd State, joined the mainstream of the nation on 16th May 1975. It shares borders with Nepal, Bhutan, and China, yet it is an island of peace, hospitality, and tranquility with the negligible crime rate.

Located in the eastern part of Sikkim, Nathula is an offshoot of the historical silk-route. The world's highest motorable pass shares border with China. The magical province pristine white snow is one of a fascinating destination in Sikkim.

Zuluk is one of the most secluded places in the eastern Sikkim. The base camp for the Indian Armed Forces and the en route to Silk route is a treasure chest of nature's grandeur and wonders. The 32 hairpin turns is one of the most remarkable features of Zuluk.

Located on the way to Nathula region, Tsomgo Lake is one of the best citation of nature's allure. Located amid the lofty mountains, the lake is encompassed with the air of mystery and tranquility.

Tracing back to the history, Yuksom is the ancient capital of Sikkim, which retains the air of rustic accompanied by absolute peacefulness. Yuksom is the abode to the oldest monasteries in Sikkim, and the sacred wishing lake called as Khecheoplari Lake, where the summoned wishes get fulfilled.

Located in the northern district of Sikkim, Lachung is often called as the Fairytale land. It is the ultimate delight to those who seek seclusion, peace. The nature lovers will find the complete bliss when the spring decks the region with wild flowers and engulfs the same with pristine white snow.

Gorudongmar Lake is one of the highest altitude freshwater lakes in the world. It is the perfect place to rejuvenate breathing in the clean and cool air of the mountainous realm. The largest and stunning lake in Sikkim carries with the mysteries and legends untold, so is considered sacred.

Sikkim has its own helipad at Gangtok, Pelling, Mangan, Namchi, and Rangpo. Chopper service is regular from Bagdogra to Gangtok. Bagdogra Airport (IXB) is approximately 125 kilometers away and is served by Indian, Go Air, Kingfisher, Spice Jet and Jet Airways flights from Kolkata, Guwahati, Chennai, and Delhi.

New Jalpaiguri railway station (NJP) is the nearest major rail head is approximately 135 kilometers away and a 4 - 5 hours drive to Gangtok / Pelling. New Jalpaiguri is well connected to the rest of India. There are regular train services to all the major railway station like Chennai, Jaipur, Delhi, Kolkata, Patna, Mumbai, Bangalore, etc.