The realm of nostalgic manors and ruins - RAJASTHAN

Pay A Visit to Rajasthan

Entreating hues, battle injured forts, breathtaking sand dunes, slightly superior pride and honor, either in nostalgic ruins or renovated to ancient glory, Rajasthan is a place on almost everybody's wish lists. Formerly known by the name Rajputana or the land of the kings, Rajasthan covers 10.4% of India. 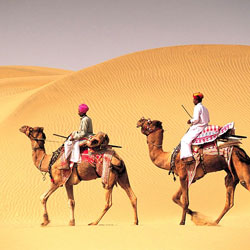 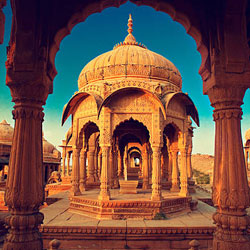 Despite its extensive size, it is coated by the Great Indian Desert, Thar.

The largest state of India owns many royal ruins that take you back to the grandeur of its kingdoms. Dotted with extravagant forts and palaces, the places to explore in Rajasthan are among the most popular tourist destinations in India. Being located at the forefront of Indian civilization, the state of Rajasthan has seen the era of kings thus, justifying the nickname 'the land of kings'. Rajasthan maintains an amazing display of arts and architecture, evidence of it being a royal state. Every single kingdom of Rajasthan has a notable characteristic of architecture and arts making it one of the most culturally different regions in the world.

Jaipur, the capital of the state is also the largest city in the princely state of Rajasthan. The planning of the city was done according to the Vedic Vastu Shastra (Indian architecture). Established in 1727, by the Kachwaha Rajput Ruler Sawai Jaisingh II, it is also known by the nickname ‘Pink City of India' which is due to the distinctive saffron or pink color of the buildings.

Founded in 1488 by the Rathore Rajput Ruler Rao Bika, the city of Bikaner is known for its forts and food. No matter how many wars the ancient city has seen in the past, today Bikaner is another prime tourist destination and is famous for its sweets and snacks.

Termed as the Venice of the East, the City of Udaipur is known by its common nickname, the city of lakes. The city was the capital of the Sisodiya Rajputs of Mewar and is famous for its palaces that exemplify the finesse of Rajputana Style architecture.

The sacred City of Pushkar is often described as the king of pilgrimage sites in India. The town is located on the shores of the Pushkar Lake, which was created by the tears of Lord Shiva and is one of the oldest cities of India and the date of its origin is unknown and is often associated with the Hindu mythology.

Jodhpur is the second largest City and the second most populated city in Rajasthan after Jaipur. Jodhpur is also called the Sun City as it enjoys a bright sunny weather all year round. Strategically, it is considered to be the most important city of western Rajasthan as it lies only at a distance of 250 kilometers from the Indo-Pakistan border.

Known as Chittor, the ancient city of Chittorgarh also was said to have been founded by the Maurya Dynasty. The place is known to be the birthplace of many great warriors and historical figures like the Great Maharana Pratap and the Hindu saint, Meera Bai. The city being an ancient place contains many different palaces, temples, and forts.

The city of Jaisalmer lies in the heart of the Thar Desert, aptly titled as 'golden city', which comes from its view during the day. The city was founded by The Bhati Rajput ruler Maharawal Jaisal Singh in 1156 AD. This is a famous tourist spot due to its magnificent architecture and the various arts and crafts which are unique to this region.

Being the only hill station in the desert, Mount Abu is the pride of Rajasthan. It is situated in the Aravalli mountain range. The place apart from being a retreat for the people of Rajasthan and Gujarat from the scorching sun but has a lot of historical and religious significance.

Surrounded by Aravalli ranges, the city of Ajmer is trickled in both history and culture. It lies near Pushkar, a major Hindu pilgrimage site and is the home of the shrine of Khwaja Moinuddin Chishti. Apart from being a pilgrimage site, it is also the home of many fascinating historic sites and therefore welcomes tourists from all over the world.

Rajasthan has good connectivity with many cities around the globe and has three major airports. For domestic/international flights, there is an airport in Jaipur. Another international airport closest to reach destinations in Rajasthan by air is at Delhi 260 kilometers away from Jaipur. Udaipur, Jaisalmer, and Jodhpur have domestic airports connected from major cities in India.

To reach Rajasthan, the train is a good option. The state as a whole has 4600 Km of railway track, which means that it is evenly spread throughout the region. This wide railway network enables the state to get easily connected with the rest of the country. However, there are direct links from major cities like Delhi, Mumbai, Chennai, Kolkata, Hyderabad, and Bangalore.

If you want to experience extraordinary leisure tour across the most significant tourist destinations in Rajasthan, you should also check out Palace on Wheels, Royal Rajasthan on Wheels and Maharajas Express. These luxury trains offer 3 to 7 night all inclusive tour in Rajasthan.

The state has well-connected state and national highways. There are twenty National Highways that snake around the state covering an area of 6373 Km. The most famous National Highway is NH8, which passes through Delhi, Jaipur, Udaipur, Ahmedabad, Vadodara, Mumbai and many others.