the land of the "Thunder Dragon" - BHUTAN

Pay A Visit to Bhutan

"Bhutan" is popularly known as the land of the "Thunder Dragon" because its valleys are wrought with the thunderous storms of monsoon every year. Bhutan does not often make headlines – it makes a small paragraph in a Western newspaper infrequently. From time to time, a full-scale article on Bhutan does appear, but then it reaches only a limited audience. 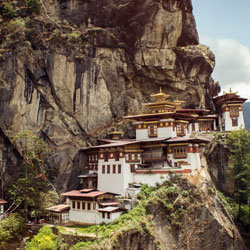 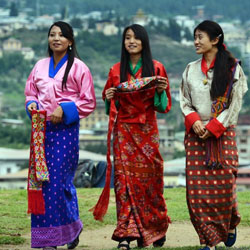 Yet, a handful of people around the world, who form a sort of "initiates" club, eagerly follow events that revolve around the Bhutanese lifestyle, politics, weather, and much more. Thereby, a weekly journal called "Kuensel" is regularly published in Thimphu. Even though visitors worldwide have visited Bhutan on professional trips, some as official guests, and others as tourists -

All of them have come back enthralled by the sheer beauty of this secret land.

Secluded in the eastern Himalayas between India and China (Tibet), as big as Switzerland, Bhutan is sparsely inhabited (a population barely measuring up to 650,000). Bhutan certainly exudes a certain charm that is completely exclusive to this domain. The mountains are magnificent, the forests are dense, the people are delightful, the air is pure, the architecture imposing, the religion exciting, the art superb. Bhutan is truly a legendary Shangri-la nestled amidst the Himalayas, a mythical province engulfed in folklores.

The National Environment Commission has been assigned the responsibility of preserving the Kingdom's cultural identity. The commission works with the entire population, rural and urban, to ensure the precious Bhutanese spirit is nurtured in the same way it has been for thousands of years. With 80 per cent of the population engaged in agriculture or raising livestock, Bhutan remains a rural country almost devoid of industry, except in the south.

The beauty of the pastoral landscape can appear to be quite unreal to travelers from the industrialized world: houses with brightly decorated window frames and shingled roofs, patchworks of green paddy fields, plots of tawny buckwheat, oak forests, a bridge moulded with rust and wood, fences of intricately woven bamboo, a man leaning on a wooden rail trampling his harvest, a woman weaving under the blue sky, a baby laced into a horse’s saddle bag, yaks grazing under the grove of giant rhododendrons.

Such scenes remain in the memory forever.

But it is the symbols of Bhutan’s religion which leave the deepest impression: the chortens (commemorative monuments) dotting the landscape, fluttering prayer flags, prayer wheels turned by the swift water of mountain streams, the monasteries. Buddhism is everywhere - determining attitudes, molding thoughts. Red- robed monks, high lamas, the religious men in a village; everybody is aware of their moral and spiritual influence on the population. Their importance is underlined further by the fact that Bhutan is the only country in the world where the Tantric form of Mahayana Buddhism is the official state religion.

The Bhutanese do not reject their cultural and spiritual heritage in favor of modern imported values. Never having been colonized, always fiercely independent and proud of their traditions, they see no need to adopt ideas simply because they come from developed and powerful countries. Using common sense, they accept only those concepts that help them to improve their way of life and develop their country within the framework of their own traditions without destroying either the spirit or the environment. Uninhibited, they continue to follow customs that many other countries would condemn as archaic. The Bhutanese have no desire for cultural assimilation. They are different and intend to remain so. "Gross National Happiness", to go back to an expression coined by King Jigme Singyee Wangchuck, is not a hollow concept. This country has set aside monetary concerns and put the general happiness on a pedestal, and has been happily thriving.

Taktsang Monastery, (Tiger's Nest). Precariously perched on the edge of a 1,200-meter cliff, this monastery creates an impressive sight and is the unofficial symbol of Bhutan. It is about 2-3 hour, totally uphill hike from the parking lot to the monastery, though there is a cafe located on a ridge across from the Taktsang (about 90 minutes into the walk) that provides a welcome opportunity to take rest and purchase refreshments and snacks. Taktsang was established as a sacred place for meditation by Guru Rinpoche who visited the site on his second visit to Bhutan in 747 CE, though the first monastery was not constructed until 1694. In 1998 a tragic fire destroyed most of the original buildings, but these have since been painstakingly restored to their former glory.

National Museum of Bhutan - Located in a former watch tower (which itself is a museum piece) above the dzong, the museum displays artifacts from Bhutan's history as well as examples of indigenous flora and fauna.

This Dzong (fortress) was built in the 16th century to commemorate a victory over the invading Tibetan forces. The fortress today lies in ruins. A fire in the 1950s has taken a toll on the site. Drukyel Dzong is about 15 km from Paro.

Drakhapo is a monastic complex perched on a cliff. Guru Rinpoche spent two months here after completing a retreat at nearby Taktsang, and during his stay placed many treasures (terma) into the cliff. The area has several hand and foot prints embedded in the rock.

Kichu Lhakhang is one of the 108 monasteries that were miraculously constructed by King Songten Gampo in one night. It is located just off the road running between Paro bazaar and the Taktsang.

Jangsarbu Lhakhang is located behind Paro Dzong. This small and insignificant looking temple is home to a magnificent statue of Sakyamuni Buddha that was carried all the way from Lhasa, and also houses the protector deity of Paro. Legend has it that the statue of Sakyamuni was destined for Paro Dzong and merely placed in the temple for overnight safe keeping. However, when the time came to move the statue, it proved impossible to lift. As a result, it became a permanent feature of the Lhakhang.

One and only one entry is by air through Paro by flight. Paro Airport (IATA: PBH, ICAO: VQPR) is six kilometers / three miles away from Paro. There are availability of regular flights from Paro to cities like Kolkata, Delhi, Kathmandu, etc.

There is no network of the railway system in Bhutan. From Bhutan, one can use the Indian Railway system at Hashimara or New Jalpaiguri in West Bengal or use the same system at Guwahati, in the state of Assam.

It has one entry point through Phuentsholing. Phuentsholing in Bhutan is a small town situated nearly 190 kilometers from Siliguri on the Indo – Bhutan border. Jaigaon is the Indian border town.

Bhutan has fine indigenous handicrafts, although not many of them. Objects are fashioned from bamboo, wood, and silver, and there are many kinds of embroidered fabric and even hand painted thangkas. Bhutanese handicrafts differ from those of other Asain countries in two respects: they are not oriented to the tourist market and is not designed or produced to be extensively sold as souvenirs. They are manufactured, embroidered and woven for regular wear, thereby remaining authentic, and they are relatively expensive. Bargaining is not a custom in Bhutan so you cannot hope to get more than ten per cent reduction. Today, however, small souvenirs made of traditional materials are produced for the travelers that don't burn a hole in your pocket and are easy fits inside your snapback.

Outside of Thimphu, Paro and Bumthang, there is little or no choice or even availability of craft items, as crafts shops are practically non-existent in the rest of Bhutan. You can buy souvenirs while traveling across the country if you meet someone who sells an object popular to the local region, but even this is not guaranteed.

Thimphu is without question the place where you can form an opinion regarding differing quality, compare items and find a wide range of sounvenirs that are representative of the Bhutan's art.

When visiting temples, it is usual to leave a small offering at the altar. This allows the visitor to contribute to keeping Bhutanese traditions alive. Since January 1988, foreign visitors have been forbidden entry inside temples in order to protect the works of art, to prevent any commercialization of the religion, and to preserve the sanctity of its ceremonies. In exceptional cases and for a particular site, written permission may be granted by the Secretary of the National Commission for Cultural Affairs.

Tashichoedzong (in winter when monks are at Punakha), Memorial Chorten of the Third King, Temples of Changlimithang and Jigmeling.

Temples of Zangdopelri and Kharbandi at Phuentsholing, Temples of Kamji, Chasilakha and Chime, and Chapcha Dzong.

Punakha Dzong (in summer when the monks are in Thimphu).

The southern circuit is the ecological hub of the country comprising of seven southern districts of Bhutan, namely, Samtse, Chukha, Dagana, Tsirang, Sarpang, Zhemgang and Pemagatshel. Zhemgang, one of the districts in southern Bhutan is ideal for nature oriented tours but even the cultural highlights are irresistible. The famous Dunmang hot spring is in Zhemgang district. There are also other hot springs in Sarpang district.

Other tour activities and attractions include the Phibsoo Wildlife Sanctuary, the Royal Manas National Park, the tropical fruits and numerous species of medicinal plants and the culture of the Khengpas and the Lhotsampas.

The Lhotsampas are the ethnic race of Nepalese origin, settled in the southern part of Bhutan. Mostly Hindus, their rituals, and festivals are very colorful.

The three relief zones of the Bhutan topography, namely the foothills, the central Himalayan valleys and the High Himalayas also highly determinant of the three climatic regions: the tropical climate, temperate climate with the monsoon, and alpine climate with spurts of monsoon. Physically, Bhutan can be divided into three zones: Alpine Zone with no forest cover (4000m and above); the Temperate Zone with conifer/broadleaf forests (2000 to 4000m); and the Subtropical Zone (150m to 2000m) with Tropical or Subtropical vegetation.

Ensuing from its wide range of altitude and climate, compounded by its 72 percent forest cover, the flora and fauna of Bhutan are diverse and rich.

Bhutan is heaven to a wide range of animals. Snow leopard, blue sheep, red panda, tiger, Takin, Marmot and musk deer are some of the species found in the high altitude. Temperate zone is a habitat to Tiger, leopard, goral, gray langur, Himalayan black beer, red panda, sambar, wild pig, and barking deer. The tropical forests in the south have the tiger, clouded leopard, elephants, one horned Rhinoceros, water buffalo, golden langur, gaur, swamp deer, hog deer horn bills, among many others.Bhutan is also considered a place favorable for birds. It is recognized as an area of high biological diversity and is known as the East Himalayan ‘hot spot’ situated as it is at the hub of 221 global endemic bird areas. Over 670 species of birds have been recorded and much more are likely to be found.